Name of the star.

The Solar discs are direct references to established archaeological finds. The idea of the sun as a form of deity has been represented in cultures ranging from the Neolithic through Egyptian and Greek periods to its continued use today. The disc acting as a form of codified, calendric wheel of prediction, that is both a cosmological instrument of measurement and a receptacle of meaning of lore and knowledge. The discs also relate to the constructional form of wooden slatted, warriors shields, with the central circular space where the protective shield boss would be. The surfaces are incised, chiselled and drilled to suggest the weathered and aged patina of a rediscovered artefact, one that bears the marks of both its implied practical and mythic use and its constructional history. The symbolism of the shield as a protector, a barrier, and as the carrier of insignia, as well as its obvious wheel like connotations, are aspects of the depth and diversity of associative responses to this work. 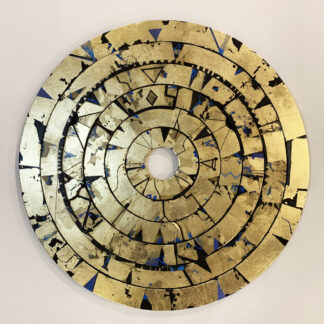